Last time, I presented to you all a general overview of what my design of Farahlon would look like, including a handy map presenting most major points of interest. I promised to go into details about the specific points later, and here I am. In this part, I’m going to present the storyline that introduces you to Farahlon. There isn’t much in terms of very unique gameplay in this specific part, so that will have to wait for the next parts. 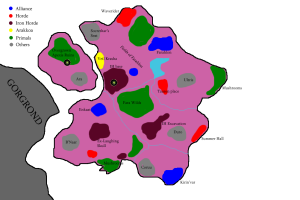 When the patch releases, you will notice either in your garrison or in Stormshield the Command Board having a new quest – you are required to visit Archmage Modera at a dock in Stormshield and depart with her for the new village Kirin Tor has established in Farahlon, this time at Jaina’s command only for Alliance. Players who have completed their previous part of the legendary questline will also notice Khadgar now directs them to Jaina in Farahlon, noting she wants to take personal control over what you’re doing. Turns out the Iron Horde has arrived in Farahlon, led by Warlord Uraga of the Bladewind Clan and is assaulting the draenei cities there and you are sent to relieve them.

When you arrive in the new Kirin’var Village, you’ll find it under attack by saberons. Image of Archmage Vargoth is present on the site (he’s afraid to appear in person) and laments his choice of place for the settlement. Turns out that when the original expedition to Draenor arrived and established Kirin’var, the saberons were already dead. In this version of Draenor, they are very alive and not happy about you encroaching on their hunting grounds. Your first quests direct you to clear the village from the invaders.

Upon completing that, the saberons phase out and the Kirin’var Village is now a fully functional quest hub. Your next task is to attack the saberon village on a peak that the Sunfury occupy in Netherstorm and to take back all the resources they have stolen, as well as freeing some apprentices they kidnapped for food. Finally, Vargoth wants you to bring back some saberon cubs – he wants to get someone to raise them so that the pack doesn’t go extinct as in our reality. With that done, you get a Kirin Tor escort to kill the saberon matriarch, the Elekkslayer.

With those done, you are told to establish your new outpost, in the shape of the Chapel or the Grain Depot, both corresponding to new garrison buildings. In Farahlon, the Chapel gives you a Divine Protection-like spell to protect yourself from lethal attacks. Its garrison counterpart, the Temple, lets you get buffs you may be missing at first level. The Grain Depot in Farahlon regularly produces buff food that you can conjure using your zone ability. Its garrison counterpart is a Farm, very similar to the one from Pandaria.

Your next quest after establishing the garrison is to check out the Apexis tower draenei call “Coruu”. The Kirin Tor doesn’t know what are those towers for, but they know they must hold some ancient magic and could be useful to take control of. You are sent to assist the Kirin Tor sent to capture it, but when you arrive, you find the Alliance troops slaughtered and the Iron Horde occupying the tower. You kill the Iron Horde troops and their leader and capture the tower, only to be attacked by the Primals. After successfully defending the tower, you phase into its real version, where one or another faction is constantly trying to capture it.

Your next quests take you out of this area, but this will be the subject of another post.

When the patch releases, you will notice either in your garrison or in Stormshield the Command Board having a new quest – you are to report to Marrow in Warspear, who proclaimed herself Warlord of the Laughing Skull Clan. With her and Durotan you depart on a ship to Farahlon. The Iron Horde’s new offensive took them to Farahlon where they’re searching for a new weapon to use against the offworlders and Durotan wants to stop them at all costs. Players on the legendary quest will also notice Khadgar now tells them to report to Rommath in Farahlon, after Jaina wanted Horde players to not cooperate so closely with the Kirin Tor.

As your fleet approaches, you notice a number of vessels, some of orcish construction and some ogre juggernauts. Upon closer inspection they’re all Shadow Council ships! Marrow orders to attack the fleet. Your first quests in Farahlon include jumping from ship to ship to kill the Shadow Council troops, including orcs, Sargerei draenei, ogres and cursed arakkoa, as well as stealing their supplies and finally pinning up the dead commanders in a traditional Laughing Skull fashion.

However, during the battle, another faction joins in and start fighting both sides. Turns out it’s the savage Waverider Clan who makes few settlements on dry land and lives most of their lives on ships and lives by plundering the goods of others, be they other orcish clans or draenei. Finally, their warlord, Rongar Lod-breaker, appears before you and challenges you to single combat to determine who gets the spoils of battle. You beat Rongar and Durotan convinces him to make an alliance instead.

Together you swim to Waverider Village, where under Durotan’s coercion the Waveriders allow you to establish an outpost. The horde outposts function much the same as Alliance ones, except the Horde gets an Altar of Storms instead of a Chapel. Also similarly to Alliance, you are sent to help conquer the Apexis tower Ara. You find your Laughing Skull troops dead, have to kill the Primals occupying the tower, only to have to defend it from the Iron Horde.

In the next part, we’ll take a look at the “bonus storylines” – side quests peppered through Farahlon, giving you some short storylines in the bonus areas that introduce some interesting characters, including Warlord Kolar of the Flowerpicker Clan, Gulag the Unbreaker and Fel-Sage Rhaze.

Verroak Krasha, an Arakkoa druid with over 50 years of experience. Formerly from Farahlon, during the Orcish expansion relocated to Skettis, then to Sethekk Halls, then to rebuilt Shattrath, following the heresies in each of those places. Finally, he founded his own succesfull alchemy business and set out into the wide cosmos to explore strange new worlds and seek out new life and boldly go where no bird has flown before. END_OF_DOCUMENT_TOKEN_TO_BE_REPLACED
This entry was posted on Thursday, August 21st, 2014 at 20:17 and tagged with Apexis, Arakkoa, Archmage Modera, Archmage Vargoth, Ashran, Bladewind Clan, Draenei, Draenor, Durotan, Farahlon, Garrisons, Jaina Proudmoore, Kirin Tor, Laughing Skull Clan, Orcs, Primals, Rommath, Saberons, Stormshield, Warcraft, Warlords of Draenor, Warspear, Waverider Clan, World of Warcraft, WoW and posted in Game Design, OOC. You can follow any responses to this entry through the RSS 2.0 feed.
« Infinite Azeroths: the Soulflayer
Infinite Azeroths: Everything »