END_OF_DOCUMENT_TOKEN_TO_BE_REPLACED

After the very people we entrusted with leading us justly and equally betrayed the ideas I believed in I felt… disoriented. I didn’t know where to go, who to see. Every friend can become an enemy once they hear what happened, or at least of the version of the story the leaders will tell the masses. I didn’t doubt they would paint me as a traitor of all of our values, someone who turned on his society. To think I once believed their lies. They said they wanted peace and prosperity for our people, but once faced with the kind of power that artifact provided us they showed their true faces. They turned their attention to war. I honestly thought that the devastation wrought upon our world would teach us something. But maybe, I thought, it was just the leaders. Maybe the Collective, that is, the people, would still believe me and see what I saw. I had to try and look for allies.

END_OF_DOCUMENT_TOKEN_TO_BE_REPLACED

Welcome back to next part of my game design exercise about the Emerald Dream expansion, which I dubbed Dream of Creation. For a while, I was struggling with the idea of how exactly should I divide up all the potential material into posts. Since designing an expansion takes up a lot of space and time, and many internal elements are very intertwined, I can’t really design everything in one, specific order, like I was able to with Farahlon. Take for example designing leveling zones. Let’s say I want to have space for six chapters of the zone’s storyline, but I can’t leave it at that. I need space for not only level cap content, but also for potential future patch areas, like parts of Krasarang used in patch 5.1. So while designing even the first leveling zone, I have to take into account how many reputation factions or other level cap activities I want to have. And when I decide how many reputation factions there will be, I have to decide what role they will have in distributing gear… so yeah. My point is, it’s a really complex system and a lot of thought has to go into it. Even when you have just one post written, you have to keep in mind almost everything else right from the very start.

So how do you decide what post to write first? I decided the best way to present this expansion will be to present it in the same order a player would normally experience it. In short, we start with the pre-expansion patch, and continue to leveling. Next post will describe at least one of the new races’ starting experience, and we will continue through leveling zones, and into endgame content of patch X.0, and only then proceed to further patches. Because I want it to feel as “real” as I can make it, I will keep information about those future patches hidden until shortly before their respective posts’ publication. So now, I invite you to the X.0.1, the Wild Hunt – the pre-expansion patch to Dream of Creation.

Another thing I wanted to speak about before the break is something else I felt would help the immersion of this exercise. Basically, after a BlizzCon announcement you’d have a Q&A session which would reveal various small (and not so small) details about the coming expansion. Well, we didn’t have it. To create one, I invite you to ask Q&A questions in the comments below. I will gladly answer all of them, pretending to be a real game dev when I can.

END_OF_DOCUMENT_TOKEN_TO_BE_REPLACED

Worlds of the Nether: Mesonyx

A long time ago, our world, Mesonyx was a lush, verdant world. We had plains, forests and oceans. Live thrived everywhere on the surface and many different races called it home, including dwarves and gnomes left behind by the Titans. We had many beautiful, large cities everywhere across the planet, from the spires of Thyle to the sprawling parks of Electris, to the famous dome of Ophyr. We had many monuments, including great pyramids which housed the greatest wonders of our technology. Most of our world shunned magic for being a harsh and unpredictable mistress and abandoned all gods to strive for independence from their whims. That was the Golden Age of Mesonyx, thousands of years ago, before the great Kalimdor was shattered. We were the most important world in our solar system, regardless of what the Titans thought. But it had to come to an end.

END_OF_DOCUMENT_TOKEN_TO_BE_REPLACED 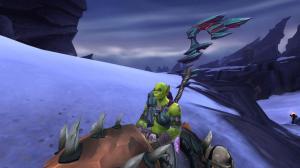 Riktal during her visit to Frostfire Ridge

END_OF_DOCUMENT_TOKEN_TO_BE_REPLACED

In most places, if you talked about inhabitants of Mesonyx, the fourth planet from our sun, people wouldn’t treat you very seriously. This isn’t most places. We’ve been sending people to a parallel past Draenor and taking ingredients from there. We have fought an invasion of Infinite Dragonflight. We finally opened a rift to a completely alien planet, met space gnomes, killed an evil undead alien god, and we regularly trade with two distant worlds. We have employees from other planets – and not just the common Draenor, but we have a darfellan and a shivarra. So naturally, an alien from Mesonyx doesn’t raise too many eyebrows. It does however answer some questions and doubts Azerothians had about the world. For example, the canals must be real and there are actually native races up there. Or rather down there, considering what we’ve learned. Anyway, let’s explain this in a proper order.