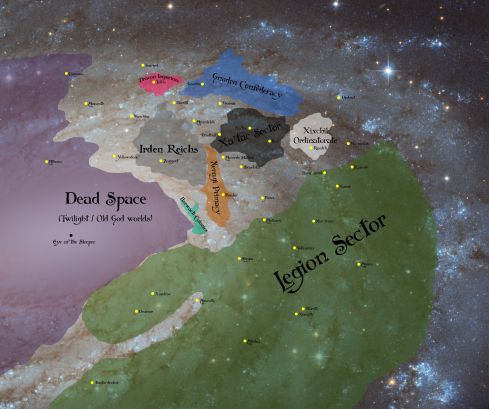 END_OF_DOCUMENT_TOKEN_TO_BE_REPLACED

Time travel. It’s complicated. And I don’t mean just the extremely powerful magic necessary to make it reality. Once you’re there, in the past or in another timeline, there is an almost infinite number of factors you have to take into account. Every step you take can end up undoing hundreds of possible lives. And every major change that brings a given timeline out of its alignment… out of its one, true fate can be disastrous. This is what the Infinite Dragonflight has been attempting for… forever, I will have to say because our mundane descriptions of duration or time lose meaning here. They attempted to throw timelines out of alignment, and thus to disintegrate them. Why? To bring chaos, entropy. And when all universes, all realities are destroyed, our entire multiverse ceases to exist and the only thing left are the Old Gods – external parasites from beyond all of creation. Without our universe to contain them, they are free. And perhaps they deserve to be free, but not at the cost of uncountable myriads of innocent lives.

Azeroth-28. An empty, dark corner of Dalaran, one that is ruled by a militaristic, jingoistic and magi-elitist Kirin Tor. One that enviously looks out to other worlds out there in the galaxy and seeks to dominate them all – but lacks the manpower and resources to do so. Not long ago, their Emperor, Khadgar, went into the white tower of Karazhan, using its temporal instability to seek new power that could overthrow the other worlds out there. He went missing for years and his Council tried to keep the Empire intact. Until, one day, he reappeared as mysteriously as he disappeared – having witnessed an alternate Azeroth, one much less developed and already embroiled in a conflict with yet another timeline. He saw this as an opportunity. Now they could command not one Azeroth, but two… or more. An infinite number of Azeroths, all striking out at the potential threats among the stars. But he underestimated the defenders this Azeroth had – the Timewalkers.

In that dark corner of Dalaran, suddenly a magical vortex opened. But this time, it was not another lazy mage quickly transporting himself from the top floor to the street. This time, it was a dwarf clad in bronze robes with the symbol of infinity on his tabard. Or rather someone that looked like a dwarf – it was, in fact, a bronze dragon, Keeper Morozdormu. And behind him, three more characters, subordinates, step out. An arakkoa hunter with a pet arcane serpent coiling behind him – Watcher Tarakan and Pita. Then, a red-haired human male with a hopeful look – Historian Llore. And finally, a dark-skinned, human-looking female mage – Weaver Agam. The four looked around until the dwarf spoke up.

“Alright, folks,” Moros said, “it looks like we landed safely, with no witnesses. Time to work.” He raised his left hand, with a strange hourglass in it. “According to our Vision of Time, we can safely stay here for just over a day. Let’s get digging!”

END_OF_DOCUMENT_TOKEN_TO_BE_REPLACED

(Official report from the away mission)

We were informed of the issues Duke Carcon of the Eastern Marches of Ivarind has a long time ago. In fact, yesterday’s mission was attempted once before, but due to an astronomical occurrence, we were prevented from completing it. Our official objective was to report to Duke Carcon and follow his directions to a dwelling of the Cult of the Star Gods and to destroy it and kill the forces within. I was accompanied by the following employees of the Tower: Gornn, Mehrzad, Zovaar the Fallen and Frlngath the Unbroken. Unfortunately, upon crossing over we found that things were again not as we intended. However, this time, instead of landing on the wrong planet we found that we were simply too late. Within minutes from our landing in Duke’s castle, we saw hostile forces engaging the inhabitants.

END_OF_DOCUMENT_TOKEN_TO_BE_REPLACED

Worlds of the Nether: Ivarind

My name is Boliviadori, and I wasked to speak about my world, the one my kind calls Ivarind. You may not be able to tell, but I’m actually a dragon. I represent violet dragonflight, the guardians of magic of our world. Although researching magic and making sure mortals do not abuse it is our primary task, we are otherwise usually neutral and unaffiliated. We accept any jobs that come our way, as long as they do not collide with our greater duties. Some time ago, when our world started contacting other worlds out there, my kind was one of the first to visit these worlds and represent ours. For that reason, many think Ivarind is a world of dragons, or mercenaries, but it has quite a bit of its own, unique civilizations.

END_OF_DOCUMENT_TOKEN_TO_BE_REPLACED

Timeline: Azeroth-41
Character: Rehgar Ironclaw, one of the chief Dark Shaman of the corrupted Kor’kron

A storm was brewing above the shores of Kargath Bay. Or rather, Grommashar Bay as “glorious Warchief Garrosh Hellscream” prefers to call it now. Ever since the Darkspear Rebellion and the Alliance failed to overcome their differences and lost in Orgrimmar, Garrosh went on an unprecedented offensive. From a villain with no popular support, he suddenly became a miracle worker. He turned the tides of war against his enemies despite overwhelming odds and all the loot-hungry adventurers knocking at his door. In his thirst for power, he ravaged Pandaria with the Sha of Pride he unleashed, and invoked upon the ancient and forbidden powers of the Old God Y’Shaarj. The creature was long dead, he thought, but Garrosh forgot the maxim the Twilight’s Hammer keeps repeating, which is ominously true – they do not live, they do not die, they are outside the cycle. Y’Shaarj will soon be reborn – in him.

END_OF_DOCUMENT_TOKEN_TO_BE_REPLACED

We got ourselves a Faceless One

I really wish my debtors would stop winding up dead or otherwise incapacitated. I mean, technically the last one was a set up with a body procured by a lich, but this time it really happened. I sent a few people to track down a Forsaken who owed me some gold. I knew he was spending time around the Bloodmoon Isle in Grizzly Hills, researching the worgen curse, probably on behalf of the Banshee Queen, although he’d never officially admit it. So I got a few people together and sent them through a portal to Grizzly Hills and told them to look for that Forsaken. After interrogating some starving trolls, they learned he hid in a nearby crypt (what is with Forsaken and crypts?) and went in to investigate. Lo and behold, the Forsaken was dead and had no gold on him. But this is where the fun part starts.