Guild Stories: The Father of Understanding

It began so very simply. A courier delivering our supplies to a man who lives out of the way in Eastvale went missing with his supplies. Thinking little of it, Hellbourne led a small group to investigate. After a small but heated exchange with a peasant, we found our man. A former warlock who decided to abandon his magic after an accident corrupted his hand, he now lived out of the way with a wife and children. He needed regular supplies from the Tower of Krasha to keep his corrupted arm in check. With a little help from Calaara’s time magic, we followed the courier’s trail back to his landing spot, which is where we found footprints, mixed with murloc prints.
Following the prints, we were saddened to find the courier dead and half-eaten by… zombie murlocs. We dispatched those murlocs with ease, but considering a presence of a ghoul among them, it was a strange occurrence. Furthermore, the courier’s package was taken by someone else onto the Stone Cairne Island.
We naturally followed the trail onto the island where we finished off more zombies assaulting a mysterious high arakkoa. Calling himself Kora Narash, he gave us a dire warning – the Tower of Krasha is in danger, and Lehba, the loa Verroak angered, has returned. If that wasn’t enough, the sky above Icecrown has been shattered and the Lich King is no more. Without its master’s command, the restless Scourge will become an even greater threat to this world…

END_OF_DOCUMENT_TOKEN_TO_BE_REPLACED 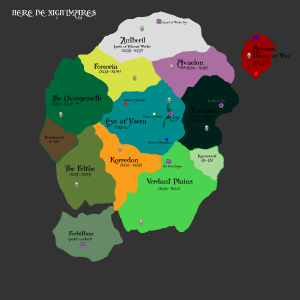 Welcome back to next part of my game design exercise about the Emerald Dream expansion, which I dubbed Dream of Creation. For a while, I was struggling with the idea of how exactly should I divide up all the potential material into posts. Since designing an expansion takes up a lot of space and time, and many internal elements are very intertwined, I can’t really design everything in one, specific order, like I was able to with Farahlon. Take for example designing leveling zones. Let’s say I want to have space for six chapters of the zone’s storyline, but I can’t leave it at that. I need space for not only level cap content, but also for potential future patch areas, like parts of Krasarang used in patch 5.1. So while designing even the first leveling zone, I have to take into account how many reputation factions or other level cap activities I want to have. And when I decide how many reputation factions there will be, I have to decide what role they will have in distributing gear… so yeah. My point is, it’s a really complex system and a lot of thought has to go into it. Even when you have just one post written, you have to keep in mind almost everything else right from the very start.

So how do you decide what post to write first? I decided the best way to present this expansion will be to present it in the same order a player would normally experience it. In short, we start with the pre-expansion patch, and continue to leveling. Next post will describe at least one of the new races’ starting experience, and we will continue through leveling zones, and into endgame content of patch X.0, and only then proceed to further patches. Because I want it to feel as “real” as I can make it, I will keep information about those future patches hidden until shortly before their respective posts’ publication. So now, I invite you to the X.0.1, the Wild Hunt – the pre-expansion patch to Dream of Creation.

Another thing I wanted to speak about before the break is something else I felt would help the immersion of this exercise. Basically, after a BlizzCon announcement you’d have a Q&A session which would reveal various small (and not so small) details about the coming expansion. Well, we didn’t have it. To create one, I invite you to ask Q&A questions in the comments below. I will gladly answer all of them, pretending to be a real game dev when I can.