Hello, my still faithful (I hope) blog readers. Since we’ve started the guild, I’ve been writing up summaries of our stories there on the guild Discord, but I never published them out to the public. I figured people would be interested in hearing what happened to Krasha since, so I’m sharing the Discord summaries here.

While Jonah was leading people around in the hunt for black dragon scales, Hellbourne’s wife, Huntress Swiftriver, became active again and seeing all the crime and corruption in the human city of Stormwind, she could not let it slide. She shot down a noble and the criminals who were selling him pandaren cubs like they were exotic pets, which put her on the trail of a criminal hydra wriggling its tentacles across Stormwind.

With the help of Castillian, Marizsa, Vincent and an occasional help of others, she hunted down the one man who escaped her last time, and discovered he was part of a larger organization. Using the journal of a man named Jesse Hoss, she uncovered more of the criminal underground and followed the leads to the dead noble’s house, where his wife still lived.

In the house, we found Yoon, a cub the Vandermars bought from the criminals years ago, now a young adult, serving them as a cook. Convinced his parents were dead, he didn’t know what really happened. Upon delivering him the news, another servant of the Vandermars interrupted us and turned out to be a Defias Brotherhood agent working to undermine Lady Vandermar. With her help, we broke into the basement and found a shocking discovery – the lady has made one of the other criminals we killed into a ghoul in an attempt to find eternal life. After killing the ghoul and the mad noblewoman, the Defias agent promised us the help of the Defias Brotherhood.

Soon afterwards, Swiftriver used the wealth she inherited from her relatives who died in Teldrassil to buy the Vandermars’ house and establish herself as a socialite to cover up her vigilante activities.

We made good on the Defias invitation and found them in a cave behind a house in Redrige Mountains, where Vanessa VanCleef herself offered us further clues, including a trail leading to another vigilante, the Executioner, and an organization called the Hand of Shadows, which was behind all the recent happenings. In the hideout, we also met a human noble working with the Defias, but secretly trying to pay us off to help him instead, Zoltan Lescovar.

First, however, we acted on a plan made by Castillian and tried to sell him – in his starry cat druid form – as an exotic pet on a Black Market auction. Trying to lure out the Hand of Shadows to buy another “exotic pet”, we almost succeeded. Cass was bought by a rakish noble who wasn’t evil after all, just an idiot, but that lured out the real agent of the Hand. We killed the agent and found a piece of the puzzle.

Unfortunately, also on the auction was “Mr. Tree” – a shoddy disguise of Krasha’s officer, Aeresham, the botani. Aeresham threatened to tell Krasha about our actions, ending them.

However, when Verroak Krasha, Aeresham and Turfang came to intervene and scold us for potentially damaging their own underworld schemes, we were attacked by three of the five leaders of the Hand of Shadows. A brain fog came over us, making us unable to act, but Krasha revealed what he needed all of those artifacts for. He turned into a dread raven Wild God and easily dispatched the corrupt nobles, one of whom had another piece of the puzzle.

We then followed through on the trail given to us by the Defias, staging a mugging to lure out the Executioner. The vigilante paladin, self-proclaimed Judge, Jury and Executioner, came out and a fight ensued on the streets of Stormwind. We were fortunately interrupted by the city guard who thought us all equally bad due to our vigilante activities. However, we used the proof we’ve gathered to unmask corruption within the city guard, leading to the commissioner letting us go, while we ended up having a talk with the Executioner.
Turns out he was manipulated, and was acting on clues given to him by Doctor Lapidis, who has now built an asylum on his remote island, and was allegedly using a psychic to predict the crimes the Executioner was stopping. We parted on friendly terms with the Executioner and left to follow his clue.

We went to the fabled Island of Doctor Lapidis and found the creepy asylum he’s built there, and a number of his unhinged patients, including a mentally handicapped janitor, a dead murderous clown and his (now lobotomized) k’thir girlfriend, and a number of serial killers held within the walls. After getting through all of them, we confronted Lapidis, only to find him with Zoltan Lescovar, and to see he is now controlling the mad paladin George the Fallen.
We managed to beat some sense into George and soon afterwards killed Zoltan and trapped Lapidis inside a tree. Lapidis turned out to have another piece of the puzzle.

We finally followed on our last clue, the pandaren who was selling her own people’s cubs to criminals in Stormwind. A friendly human monk helped us find her in the Jade Forest. As it turned out, Madame Zhao was as bad as everyone thought and after a tough battle with her and her Jade Statue, we cut her down. However, she turned out to have no puzzle pieces on her – and the monk revealed himself to be an agent of the Hand. Dealing with him too, we found our last piece and we were ready to find the real leaders.

As we completed the puzzle box and solved it, we found it to be a map of Stormwind, but we didn’t know where the map was leading. After walking around the city with it in hand, we finally realized it had the icon of a hand in place of the fountain in front of the Stormwind Cathedral. At the pedestal beneath Uther’s statue we found an indent where the puzzle box fit perfectly. Then, the pedestal slid off and revealed a hidden passage leading to underground lair… We left to prepare.

A while later, we called on the help of the Executioner and Vanessa VanCleef to infiltrate the catacombs beneath Stormwind, where we were assaulted by a number of conditioned drones – the result of Lapidis’s experiments on the mental patients. After wading through them, we found the real leader. A woman who claimed to have been the first human ever born to a vrykul, now ancient and kept alive by a Titan sacrophagus given to her, allegedly, by Tyr himself. However, the sarcophagus has driven her quite insane. After destroying it, we managed to kill her and her underlings, putting an end to this criminal hydra.

END_OF_DOCUMENT_TOKEN_TO_BE_REPLACED

Signing of the Gnadra Accords – Thread on the RP forum

END_OF_DOCUMENT_TOKEN_TO_BE_REPLACED 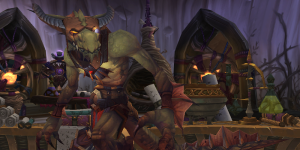 END_OF_DOCUMENT_TOKEN_TO_BE_REPLACED

We were recently contacted by a pirate from K’aresh, who promised to tell us about a world containing an untouched Titanic vault, in exchange for some goods. We of course suspected this offer from the very start. Not only there’s a question of why didn’t he open and plunder it himself, but also if it really is as good as he claimed. In the end, I was sent off to meet him on Darfell with a crate of potions that only Azeroth produces. To my surprise, it wasn’t an ethereal but an emaciated humanoid in your typical pirate gear, with some kind of raccoon/monkey hybrid on his shoulder (I’m told it’s called a chattur). Apparently one of the few fleshy survivors of the cataclysm that ruined K’aresh, this “corporeal” claimed he’s only giving us the address because getting to the loot is too expensive for him. I decided it would be worth to at least check out, paid our due and left with the necessary information.