Here comes my second part of a demonic allied race duet I had planned. While eredar are something I wanted playable for a while in some form and considered both factions for them, I found them going to the Horde as a way to oppose the draenei the better choice. After that, the question remained, what is the best Alliance counterpart to eredar? I could go for a low-hanging fruit and grab high elves because they seem as the straightest counterpart, but not only they are extremely un-demonic, I also prefer more unorthodox options for these posts. So I defaulted to two of my favorite demon races: mo’arg and satyrs.

Mo’arg are a great race. They are probably the most versatile non-eredar race that we’ve seen. Among their numbers, we’ve seen the cyborg doomsmiths, the stunted gan’arg, the hulking felguards and the new brutes. A couple of other unique demons were never given a racial descriptor and seem like they’d be mo’arg too. However, it feels like allied race would not be enough for them. And I ended up finding satyrs to be a better fit as an allied race, since they too had Legion involvement like the eredar, and also resemble another race, much like the eredar. Unfortunately, it’s another night elf offshoot, but they could work despite this. Therefore, I introduce the satyrs. 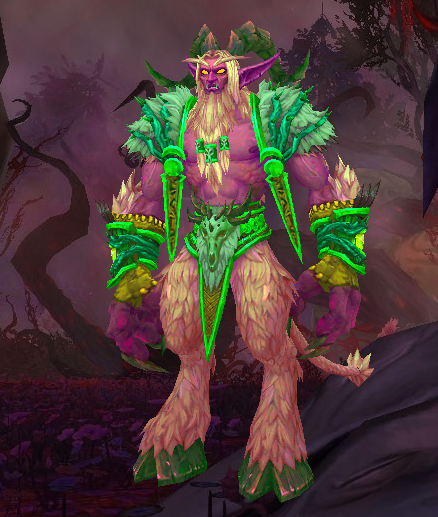 For many night elves, satyrs are the enemy. The ancient force of corruption, made from their own brethren who listened to the whispers of the Burning Legion. And if that was not enough, they dance from one great enemy to another, dedicating themselves to the Emerald Nightmare and its Old God master. But those nuances mean few people know the truth about the satyrs and their flexibility. Perhaps there is a yet different faction of satyrs somewhere deep in the Dream, that escaped the corruption of their brethren.

Like the eredar, the satyrs are first met in a special questline that sees the Alliance – and especially night elves – return to the Emerald Dream following the end of Legion expansion. During the first months of the Legion invasion, adventurers ventured into the Emerald Dream, defeated Xavius once again, and purified it of the Nightmare taint. Again. Unfortunately, in the process Ysera, the guardian of the Dream, became corrupted and then died. The end of the raid suggests everyone that all the demigods that became corrupted and died are slowly returning (other than Ysera who somehow became a set of thermonuclear superheated balls of gas thousands of light years away). The lack of Ysera may throw a wrench into the Emerald Dream.

As it turns out in this questline, after the burning of Teldrassil, majority of night elves left either for Gilneas or Val’sharah. Malfurion led his people to Val’sharah, and that’s where he summons you. He explains that to secure this land for his people, he must cleanse Shaladrassil and enter the Dream rift still present at the roots of the tree, and he invites you along because of your role in the defeat of Xavius.

Together you venture through the portal into the Eye of Ysera, the capital of the green dragonflight. However, once there, instead of the purified tranquil glade you expected it to be, you find it in chaos. Not Nightmare, but simply nature growing out of control and fighting itself. The green dragons you find explain that without Ysera, and with all the demigods regenerating, the Dream is completely uncontrolled. The raw power cannot be contained without a guardian, and the dragons are not enough. Malfurion offers his and your help, and thus, the new faction and storyline begin.

Over time, you find that a group of satyrs who survived the purge is behind the chaos. They’ve been inciting nature to fight, all in an attempt to have that strife bring the Nightmare back. After a while, you see them succeed a little bit. Small pockets of the Nightmare begin to manifest. In one such pocket, you find an albino satyr prince who says he will bring “the Father” back no matter the cost. You and Malfurion end up following him to the Rift of Aln, where you see a great nightmare tree. From the tree, a deep and familiar voice speaks to the Albino. It’s Xavius. He survived his defeat once more, and retreated into the tree form to recuperate. The amount of satyrs there make it impossible to destroy him now, but you now know your enemy.

In the process, you also find a splinter group of satyrs led by Princess Ivixa. These particular satyrs bear no allegiance to either the Legion or Old God faction, and are simply pranksters who live in harmony with the Dream, being born to demonic satyr parents without choice in the matter. Malfurion doesn’t want to trust them, but the green dragons are willing to take that step. Together with these prankster satyrs, you venture deep into the uncharted layers of the Dream, to find the Fount of the Moon, the legendary source of power of much of dream’s endless creative energy. The Fount is revealed to be directly connected to Elune and with its help, the good satyrs are purified of their taint, while keeping their form (more or less).

In the storyline finale, the good satyrs take a part of the Fount’s power with them to confront the Albino. After a long and difficult fight, the Albino is defeated, but not before prophesising the eventual return of Xavius. “Father always returns… he is eternal.” Malfurion realizes that by turning him into a tree, he gave Xavius an unbreakable bond to the Emerald Dream. The only way to destroy him forever is to break that link and undo his ancient magic. Malfurion enters a great ritual that expends almost all of his energy to destroy the tree. Once the spirit of Xavius is liberated, Ivixa then uses the Fount’s power to sever Xavius from the Dream permanently and banish him to the Twisting Nether like yet another demon.

Some time after completing the questline, Malfurion invites you to the Alliance embassy in Stormwind, where he vouches for the new satyr faction to join the Alliance. Anduin agrees, and decides to send you into the Eye of Ysera once again to officially recruit them. Unfortunately, after following through the portal in the Twilight Grove, you find the Eye under assault by a force of a different shade of green… demons! In the Emerald Dream!

No one knows who these invaders are, since the Burning Legion has been defeated, but everything is explained after you hear the familiar voice once again. It’s Xavius, who has returned once again, but this time green. He explains that once he was banished to the Nether, he met Mal’Ganis who offered to restore his power in exchange for serving Mal’Ganis’s new Dread Legion. Xavius quickly agreed and returned in a new, more corrupted form.

You meet up Princess Invixa and her archdruid, Zyndaxxia, in the ruins of their former palace. It is now clear to them that even banishing Xavius to the Twisting Nether was not enough. Since a sliver of the Fount’s power was not enough, you must do a very risky act of leading to the very Fount of the Moon itself. Malfurion doesn’t want to hear of it, because he fears it would risk Xavius corrupting the Fount, but Ivixa and the green dragons overrule him. He leaves in protest to fight for the Dream in a more traditional way, while you go deep into the Dream once again, with Xavius and the Dread Legion harrowing you on every step.

After going through a few layers, you finally enter the deepest and greenest layer and see the shimmering fount of power once again. Xavius is not far behind you, and is in awe at the sight of the Fount. He gloats that you led him to your doom, as he will now claim the power of the Fount, and even Elune can’t stop him. After all, did she ever stop him before from corrupting her precious children? He begins spreading fel energy into the Fount, which begins cracking and extruding a lot of holy energy. Xavius begins choking, but he is relentless. Finally, the Fount glows green with fel and Xavius laughs how he would corrupt Elune herself. And this is when things get weird.

You are all whisked away in the last moment. You end up teleporting to the surface of the White Lady. All around you is a silvery, lifeless wasteland, and despite not being underwater you get a breath bar. That is, however, the least of your worries, as you’re taking massive frost damage. You end up frozen at 1 HP, while Xavius is fighting all the way through. He laughs it off as Elune thinking a little cold can scare him, especially now that he has seen the domain of the Legion in the Twisting Nether. However, while you are frozen, he continues to take damage, and begins wasting away from the all-permeating holy energy of the moon itself. In the end, he is wholly obliterated.

Moments later, you are teleported back where you came from, to Ivixa’s old palace. As you thaw out, you see Malfurion and his night elven allies have beaten the satyrs while you were out on the moon. With Xavius taken out by Elune herself and his new army beaten back, the fey satyrs are free once again. In thanks to your involvement, Ivixa offers her services to the Alliance. You soon meet her back in Stormwind, where she officially pledges herself and her satyrs, and the allied race is officially unlocked.

Your new satyrs start at level 20 in the Emerald Dream version of Darkhear Thicket. Ivixa’s new palace has become a training ground for the satyrs. Their new hunters start with goat pets, and druids get forms similar to night elven – but far more shaggy, and with goat horns. Only the travel form is a proper goat.

Verroak Krasha, an Arakkoa druid with over 50 years of experience. Formerly from Farahlon, during the Orcish expansion relocated to Skettis, then to Sethekk Halls, then to rebuilt Shattrath, following the heresies in each of those places. Finally, he founded his own succesfull alchemy business and set out into the wide cosmos to explore strange new worlds and seek out new life and boldly go where no bird has flown before. END_OF_DOCUMENT_TOKEN_TO_BE_REPLACED
This entry was posted on Sunday, March 25th, 2018 at 13:23 and posted in Allied Races, Game Design, OOC. You can follow any responses to this entry through the RSS 2.0 feed.
« Allied Races: Eredar
Brief list of expansion ideas »