A new world awaits. Join me!

Denizens of Azeroth and Outland! And Draenor too, if you still care about this universe. I bear news to you, that should be of interest to all of you. I would call you heroes, like your pretentious leaders do, but we all know you’re no heroes. The big “heroes”, the ponces running around with the artifacts, are all leaving for Argus for their big universe saving mission. And I wish them all the best, but some of us have smaller goals in mind for ourselves. Goals that directly benefit us, and not some lofty greater good. This is who I’m addressing this news to: the everyday average folks who are willing to do a job for pay. 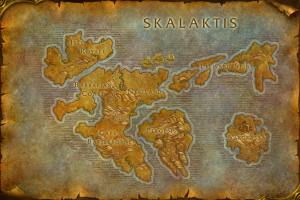 I have found a new world. An unspoiled wilderness, filled with untapped resources, uncontacted savages and ancient ruins and primeval jungles waiting to be discovered and claimed. And this world belongs to me now. The only problem is, I do not have the manpower to have all of it charted, claimed and exploited by my own people. So I reach out to you all. Help me in this endeavour, and you shall see riches like few on Azeroth have ever seen. If you gain enough of my approval, I shall sell you small pieces of the land where you can build your palaces, strongholds, garrisons, or whatever it is you call your bases now. But first, you have work to do.

You need no prior association with me or my forces to be allowed in. I do not even ask of you to relinquish your faction afiliations this time. All I ask is that you are not an active agent of the enemies of all life – like the Old Gods or the Burning Legion – and that you do not bring your old conflicts back to my new world. I mean, if you just kill each other in the wilderness for the Horde or the Alliance, I could not care less, but destroy things that belong to me or disrupt my operations because like fools you cling to old hatreds, and my people shall bear down on you like the wrath of an angry god.

OOC: Everyone is welcome to join this new event! Everyone! My only exceptions are related to story integrity. I will be reluctant to accept anyone who openly followed the Void or the Legion, or any other vital threat to universal existence, or people who have established enmity with Verroak and the Tower of Krasha. Those are the few limitations. But other than that, everyone is invited to join!

It is up to you to decide which accounts fit the story. I make few limitations and intend this event to be open to as many people and characters as possible. If you feel you have no characters that would be good at this, you’re welcome to make a new Twitter account for a new or off-Twitter characters, but I assure you: I will do what I can to make it fitting for everyone.

Sign up with my people at the old tower in Duskwood, or any number of messengers I will be sending to major capitals of your worlds. If you cannot find one, just send a message to us and we will send someone to a nearby location. Once you signed up, you will soon get our message back about our ship’s arrival to your world, and will be transported directly to Skalaktis.

OOC: To sign up, message, in-character, any of the Twitter accounts that are directly associated with the Tower of Krasha. That includes @Arakkoa, @OrkanKrasha, @BlackViperUldum, @YuGwai and @WoWRPGM. The sign ups will probably also be accepted by @BloodyBalerok and @JaizymYib, but they are not directly controlled by me. I might also accept sign-ups on WordPress or Facebook, but you will need a Twitter account for the main event anyway.

What can you find here? No one knows! That’s the beauty of it! All we know most of the world is tropical in climate, and it used to be a pirate haven. While we defeated some of the pirates to establish our foothold, Veil Salavass, we will need your help to clear out the rest of them. We also know of at least two races of natives: parrot people called kekoa who stupidly sold their world to us for a handful of gold, corals and other ornamentations, and a race of earth giants who were not very talkative in a few scout passes we made in our ship. We also saw sprawling Titan ruins deeper in the islands and we have full intentions of exploring them and any forgotten knowledge they may house.

It’s not much, isn’t it? But that’s why I need you. Go forth and explore, claim the riches for me and for yourself, and together, we shall make this world ours.

Verroak Krasha, an Arakkoa druid with over 50 years of experience. Formerly from Farahlon, during the Orcish expansion relocated to Skettis, then to Sethekk Halls, then to rebuilt Shattrath, following the heresies in each of those places. Finally, he founded his own succesfull alchemy business and set out into the wide cosmos to explore strange new worlds and seek out new life and boldly go where no bird has flown before. END_OF_DOCUMENT_TOKEN_TO_BE_REPLACED
This entry was posted on Wednesday, August 30th, 2017 at 10:11 and posted in IC, OOC, The New World, Verroak Krasha. You can follow any responses to this entry through the RSS 2.0 feed.
« Skalaktis, the New World
Secret History of the Nathrezim »

One response to “A new world awaits. Join me!”