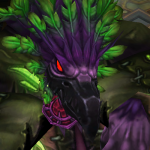 After witnessing my father depart with Murozond, I knew I had to work with the Timewalkers to try to fix the mess he created. We worked out one specific detail: we had to find the original point of divergence between our original timeline and the mess altered by my father. Luckily, he wasn’t shy about mentioning, although cryptically, what he did exactly. He spoke of a “butterfly moment” way back in the past, the day Isha died in the original timeline, a glass tipped over. I knew I couldn’t just go to the past Draenor and fix the glass, because such a brutal insertion would cause certain temporal damage, and also because going to Draenor’s past isn’t exactly easy. Remember when Kairozdormu needed a special Vision of Time to do that? Yeah, and he still only went to an alternate Draenor. Going to our own, without affecting history, would be even more difficult and dangerous. Luckily, Anachronos had just the right idea.

He used a modified version of a Vision of Time to deposit us months before the point of divergence, the razing of Veil Krasha in Farahlon. For safety, we weren’t deposited into Farahlon, but a bit further south, in Terokkar – or Talador, the draenei name Anachronos insisted on using. Once there, we detected a strong temporal reading and upon noticing a large, pointy mountain nearby we remembered – in the original timeline, there was no Zangarra swamp where Khadgar placed his tower in the alternate Draenor. There was the Chronal Spire. A Titan mechanism that Aggramar must have left on Draenor to monitor its timeline. Luckily for us, its original guardians were long gone, and the high arakkoa who sat on it for ages without a clue what’s it for were similarly extinct. Me and a group of Timewalkers assigned by Anachronos took over the Spire and began examining the threads of time to find the right point to change the timeline.

We needed some help, though. I called upon one strange human that my father spoke of. Prella Northshire, I believe. A human warlock who, as my still sane father said, had delusions caused by unauthorized time travel. She was convinced she was some kind of human alien with power over time and had a friend who traveled in space and time in a blue box. It’s a fictional character from some old story, but I guess uncle Verroak believed in various strange, fictional things too, once. She showed up on her own during our fight with Murozond too, so I knew she was capable, if slightly insane. She didn’t hesitate to go to the present day Outland on my call, so she’s not bad. What I needed her for was visiting the crumbling ruins of Veil Krasha, the focal point of this change, and examine a few things as we checked the timeline in the Spire in the past. She found a number of items and noticed something we should have – the Twisting Nether’s unique temporal properties let the Veil stay less affected by the change, and still have a couple of items from before. It was a key clue to let us safely restore the timeline. When we discovered that, all we needed was to find the right thread to pull to restore the timeline, and searching for it would take some time.

Meanwhile, I heard from Anachronos that Isha decided to show up on his doorstep after she heard about Tarakan. It seems in this changed timeline, Tarakan was never a Timewalker and all she remembered of him was being a hunter who joined the Unseen Path during the recent campaign. Anachronos explained everything that was going on. And you know what, Verroak would absolutely flip out if he learned he was some aberration caused by a botched timeline. He would not let himself be erased to bring back the “right” timeline. Isha, to her credit, realized she can’t allow this to continue, despite her own good. From what I hear, her only problem was “all the people she helped”. A regrettable loss, but we would have far bigger ones if we didn’t fix the timeline.

After she came back home, she decided to pay a visit to Skreah. Don’t ask me why, I wasn’t on speaking terms with Isha after she kicked me out of my home and I don’t ask Skreah about her personal life. Apparently, while they were there, my father proved to not be completely gone yet. He dropped by and tried harassing Isha, convincing her she needs to keep the timeline changed, for her own sake, as well as the people in her care. She resisted, until Skreah showed up and detected a second presence within Tarakan’s body. A few spells later, and she uncovered the truth about father’s recent insanity. He wasn’t himself. He was possessed by an ancient being from the Void, one we still can’t quite pin-point as to what exactly it was. In his own words?

“I am he who is not to be named. The Unspeakable One. The King in Yellow. The God of Paradoxes. I. AM. X’AAZTRE.”

Yup, the ancient abomination that was behind the corruption of the Infinite Dragonflight, one that I only heard about in whispers and second-hand stories from my father. It was now riding his body like an old bicycle, for fel knows what reasons. He then continued to spill out his plans to Isha and Skreah – mentioning another Chrono-Lord by the name of Theta, who would go back and undo Illidan and his role in the recent events. Theta – fittingly, the same creature that pretended to be the fictional alien Prella believed in.

The plot thickened, and we all needed to make our preparations to undo this aberration.

Verroak Krasha, an Arakkoa druid with over 50 years of experience. Formerly from Farahlon, during the Orcish expansion relocated to Skettis, then to Sethekk Halls, then to rebuilt Shattrath, following the heresies in each of those places. Finally, he founded his own succesfull alchemy business and set out into the wide cosmos to explore strange new worlds and seek out new life and boldly go where no bird has flown before. END_OF_DOCUMENT_TOKEN_TO_BE_REPLACED
This entry was posted on Saturday, August 26th, 2017 at 09:25 and posted in IC, Krashpoint, Memoirs, Orkan Krasha. You can follow any responses to this entry through the RSS 2.0 feed.
« Krashpoint: Displaced
Krashpoint: Fighting back »